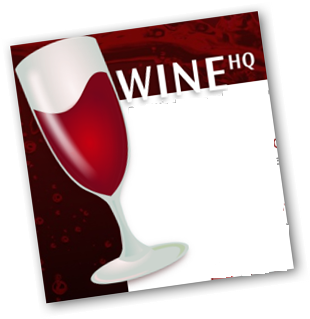 Wine is an Open Source
implementation of the Windows API on top of X, OpenGL, and Unix. Think of Wine as a compatibility layer for running Windows programs. Wine does not require Microsoft Windows, as it is a completely free alternative implementation of the Windows API consisting of 100% non-Microsoft code, however Wine can optionally use native Windows DLLs if they are available. Wine provides both a development toolkit for porting Windows source code to Unix as well as a program loader, allowing many unmodified Windows programs to run on x86-based Unixes, including Linux, FreeBSD, Mac OS X, and Solaris. Wine is a translation layer (a program loader) capable of running Windows applications on Linux and other POSIX compatible operating systems. Windows programs running in Wine act as native programs would, running without the performance or memory usage penalties of an emulato

r, with a similar look and feel to other applications on your desktop.

The Wine project started in 1993 as a way to support running Windows 3.1 programs on Linux. Bob Amstadt was the original coordinator, but turned it over fairly early on to Alexandre Julliard, who has run it ever since. Over the years, ports for other Unixes have been added, along with support for Win32 as Win32 applications became popular.

Wine is still under development, and it is not yet suitable for general use. Nevertheless, many people find it useful in running a growing number of Windows programs. Please see the Application Database for success and failure reports for hundreds of Windows programs, as well as the Bug Tracking Database for a list of known issues, and the Status page for a global view on Wine's implementation progress.