Record your mouse and keyboard input to auto-perform repetitive tasks 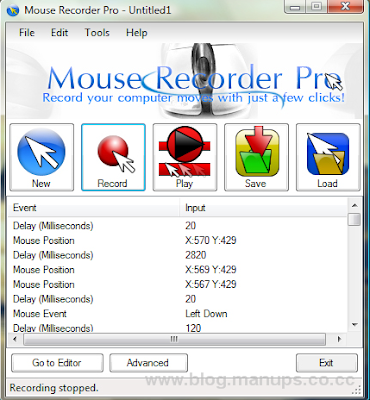 Mouse Recorder Pro is an input recording application (mouse and keyboard input), with this application you can create script´s of recordings you have made (moving your mouse, clicking on a button, pressing keys), now all of these annoying repetitive tasks will be done easily!

* easy to understand interface.
* small sized.
* you can play any script how much time you want.
* set a script to be played in a specific time.
* save and load your scripts with no limits!
* edit your scripts by using the event editing system.

* Added a new feature in MRPEditor which allows you to reduce or increase a script speed by a certain percentage.
* A new icon for Mouse Recorder Pro 2!
* Added the option to play a task every couple of hours in MRP Calendar.
* Fixed a wrong key mapping "" (Bug reported).
* Fixed mouse recording accuracy, Mouse Recorder Pro is now much more accurate then ever!
* Fixed a mouse tracing bug with gaming mouses (like the Logitech G5) where MRP couldn't record well mouse movements (Bug reported).
* Added a feature that tells MRP no to pop up after a recording/playing (can be found in the Settings window).
* This version is more "CPU" friendly.