Remove Fake Antivirus from your computer

* Alerting the user with the fake or simulated detection of malware or pornography.
* Displaying an animation simulating a system crash and reboot.
* Selectively disabling parts of the system to prevent the user from uninstalling them. Some may also  prevent anti-malware programs from running, disable automatic system software updates and block access to websites of anti-malware vendors.
* Installing actual malware onto the computer, then alerting the user after "detecting" them. This method is less common as the malware is likely to be detected by legitimate anti-malware programs. 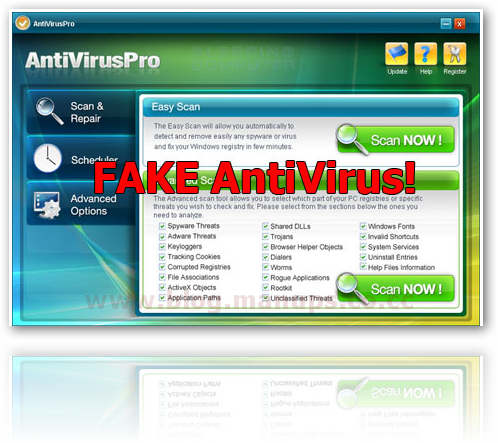 Developers of Fake Antivirus software may also entice people into purchasing their product by claiming to give a portion of their sales to a charitable cause. The rogue Green antivirus, for example, claims to donate $2 to an environmental care program for each sale made.
Some rogue security software overlaps in function with scareware by also:

* Presenting offers to fix urgent performance problems or perform essential housekeeping on the computer.
* Scaring the user by presenting authentic-looking pop-up warnings and security alerts, which may mimic actual system notices.These are intended to leverage the trust of the user in vendors of legitimate security software.