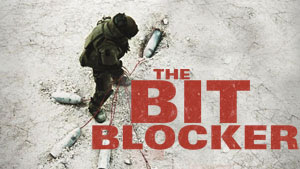 Voltage Pictures and the US Copyright Group are teaming up to sue "tens of thousands" of P2P users who downloaded the film The Hurt Locker illegally. A lawyer from the group confirmed the studio's plans to the Hollywood Reporter Wednesday, noting that the scope of this lawsuit is much more far-reaching than the copyright group's past pursuits.
The Hurt Locker, like many other Hollywood films, was leaked onto BitTorrent months before its official release in theaters. It wasn't a particularly high-grossing film—it only made $16 million—but it did end up winning six Oscars. Undoubtedly, the film's early leak online combined with the relatively low earnings is part of the reason Voltage and the US Copyright Group decided to sue. The lawsuit has not yet been filed, but the firm expects it to happen later today.
The US Copyright Group has made a name for itself by helping movie studios (mostly independent ones) sue thousands of P2P users in an attempt to "stop movie copyright infringement and make illegal downloaders pay damages for the content they have stolen." Last month, the group made headlines by helping German director Uwe Boll sue more than 2,000 P2P users for downloading his film Far Cry.
The firm uses tech from GuardaLey, which collects the IP addresses of users that are believed to be downloading the film from BitTorrent. From the IP address, it figures out which ISP is responsible and e-mails it, asking the ISP to retain all logs for the IP address identified at the time in question. Once the content of the download is verified, the lawyers take over and subpoena the ISPs for subscriber information in order to find out exactly who has been naughty. Once the users are unmasked—and according to the group, nearly all ISPs cooperate—the firm sends settlement offers.
As we observed when we covered the Far Cry suit last month, this one is straight out of the RIAA's playbook, and the US Copyright Group is hoping that it works this time around too. "You can guess that relative to the films we've pursued already, the order of magnitude [with The Hurt Locker] is much higher," attorney Thomas Dunlap told the Reporter. With the firm promising thousands more lawsuits on behalf of copyright owners, it certainly looks like it's banking on this strategy bringing in the bucks.
Bittorrent