Scan your PC for virus even before Windows startup

Posted by Manu on December 09, 2011
Microsoft has launched a new product,  Windows Defender Offline beta. Its based on Windows Anti-Spyware. The feature of this product is that it is designed to be executed from a DVD or USB flash drive even before Windows starts up.

The recent versions of windows contains the Windows Defender program. The normal windows defender starts on the basis of windows services, so it will run only after windows start-up. Sometimes rootkits or other malicious program may overrun, because they will be loaded even before windows defender stared. To overcome this situation Microsoft has introduced Windows Defender Offiline beta.

Windows Defender Offile is  designed to scan your system for malware such as root-kits, or viruses that aren't constantly running processes and only act at start-up or at unpredictable random times. To do this, it needs to be installed on a  removable media.

The program is offered for 32-bit or 64-bit web installer. Please choose the right version of the installer  for your system. The web installer downloads 250 MB of data. The data can be burned to CD or DVD, put on a USB flash drive or saved as an ISO file. 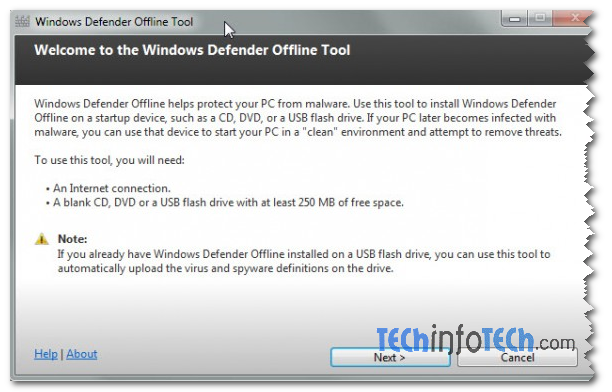 Now use the newly created DVD or USB media to boot the system and scan for malicious programs.

There are many other programs similar to this, I have tested windows defender offline beta, I cannot say that it is too good or too bad. Overall I can say that it is an above average product.